Two Features of Realm X to Support Photography and Games

Realme X has been officially launched by Realme in its home country through an event at the Dream Art Center, Beijing, China, Wednesday (05/15/2019). The cellphone, which is sold starting from 1,499 Yuan, is claimed to provide two features to support photography activities and play games . Problem portrait-shooting, Realme X is equipped with dual cameras on the back, each with a resolution of 48 megapixels (f / 1.7), Sony IMX 586 sensor and 5 megapixel (f / 2.4, depth sensor). 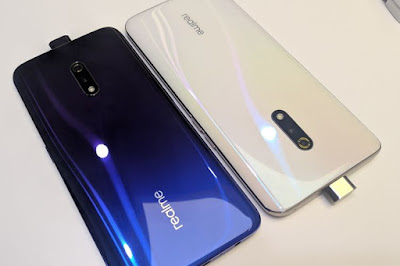 This camera is also equipped with artificial intelligence technology (AI) and other functions to optimize the shots, such as Nightscape for night views, and Chroma Boost to boost contrast. Video recording can be done up to a frame rate of 960 FPS in HD resolution (720p) for super slow motion or 120 FPS in Full HD (1080p) resolution. In addition, there is a pop-up model selfie camera  hidden on the top side of the phone and will only appear when needed. The resolution is 16 megapixels (f / 2.0) and also equipped with AI Beauty and the ability to  detect scene.

"HyperBoost 2.0" for games Realme X also promises qualified gaming  capabilities  to play games like PUBG Mobile smoothly. Realme claims that Realme X can run the game with "high" frame rate settings and "high" graphic quality as well. This can be achieved because Realme X is powered by Snapdragon 710 chip which has an Adreno 616 graphics processor (GPU).

Under HyperBoost 2.0 there are three functions. First is System Boost 2.0, to boost overall game performance, then Game Boost 2.0 to optimize touch control and latency , and App Boost 2.0 to keep frame rates more stable when playing games. HyperBoost 2.0 technology can also be used to prioritize access to an internet connection for the game being played so as to minimize lag.