In Germany, a giant gas canister was converted into an art gallery

Germany is famous for its fast-growing industry. As technology progressed, old technology such as the giant gas canisters was turned into an art gallery.

Nobody doubts technological progress in Germany. Technological advances in the Land of Bavaria gave birth to new industrial cities such as Oberhausen in the Ruhr Valley area. But that was then. 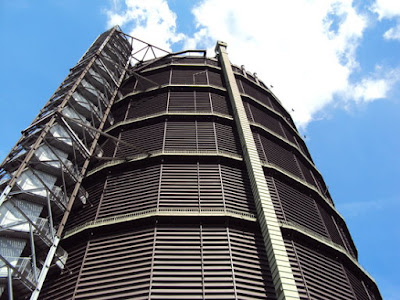 As technology advances too, industries with heavy equipment are now becoming obsolete. As a result, many old factories were abandoned. Instead of being stalled and destroyed, there are several buildings that are converted for tourism. One of them is the Oberhausen Gasometer.

Arriving at the Oberhausen Gasometer, we were welcomed by Thomas Macoczeck, the guide who would accompany us around. To AFP, Thomas told a lot about the history of the building as high as 170 meters and 67.6 meters in diameter.

"This gasometer is a gas storage area. It was used for the steel making industry. The building was built in 1927 and began to be used in 1929," Thomas told AFP on Saturday (3/23).

During the Second World War, the building, which was able to accommodate 347 thousand cubic meters of gas, was damaged by the bomb. Until 1949, the building was completely reconstructed. But in the end, the steel industry in Oberhausen was closed due to lack of demand.

In 1994, the gasometer began to be converted to tourism. This giant gas storage is used as a gallery to display various kinds of paintings and other works of art. The tourists also began to come to throng this destination.

"In 1994 it started to become an art exhibition venue. Now, this Gasometer has been visited by 1.3 million visitors in the last 2 years," added Thomas.
When our group arrived, an exhibition was held titled 'The Mountain Calls' which was located inside the Gasometer building. It contained an exhibition of photographs about the world's cool mountains. The exhibition will be held until October 27, 2019.

From the mountains in Nepal, to the Rainbow Mountains in China, photographs are displayed here. Visitors look enthusiastic seeing these cool photos one by one. In total there are 3 floors in this building which are used as exhibition space.

On the third floor, it is used to exhibit the very cool 3 dimensional installation of Mount Materhorn. The appearance of the Materhorn in the light of the various colors that make one after another makes it even more magical.

The visitors can watch this exhibition while lying in a beanbag that has been provided in an area like an amphitheater. While looking up, a traveler can watch this cool work of art. Ah, if in Indonesia there were cool exhibitions like this!

A traveler can also climb to the top of the biggest Gasometer building on this European continent. Through the glass elevator, a traveler can go up to the highest floor and see the beautiful view of the industrial city of Oberhausen from a height.

Concerning security, don't be afraid because the steel fence surrounds the top of this building. Traveler can also peek through binoculars that have been provided so they can see the appearance of the city of Oberhausen more clearly.

To enter the Oberhausen Gasometer building, an entrance ticket of 10 Euros (around Rp 160 thousand) is required for an adult. Whereas children only pay around 4 Euros (around Rp. 65 thousand).